The beauty of cricket is there is no ‘end’. We strive towards goals but will always leave the pitch with things we could have done better. I could have scored more runs, I should have taken more wickets.

As a batter, cricket is a game of practising for countless hours to react appropriately in a single moment. Do it, and you can find yourself sticking around for at least one more delivery. Misjudge the length or line of a ball and the only other delivery you will be seeing is the UberEats you order to eat away the pain of scoring an average total for yet another week. Cricket is often unforgiving to even its most passionate participants.

With this in mind, it truly is remarkable when players can achieve heroic innings and score big totals. Ricky Ponting once said that the most important ball any batter will face is the next one. It’s the mindset of taking each moment as it comes and looking to win each moment. But there are so many moments in scoring triple figures, so I wanted to look into what makes a historic innings, be it for country or club.

The Long Walk Out

This is where every innings starts, on the walk to the middle. Intentional nerves have kicked in as you go through your routine; three side steps, jog a few paces, shadow drives and defence shots. The previous batsmen have been dismissed early, so the field is rife with chatter. This is your first battle, putting up a mental wall and focusing on one thing: that shiny red Kookaburra ball about to come your way. The bowler is clearly confident and screams into the crease and throws down a late swinging delivery, hesitant hands fish for the ball and the slips cordon go up in a massive roar, they have heard something. Holding your breath, you look down at the pitch and shrug. The umpire remains static, nothing in it. “That’s your one life”, you say. “Time to make it count…”

The chatter from the fielders is still alive and well but you are too focused to take notice. You dispatch a few bad balls to the ropes in between observations. No two wickets will ever be exactly the same, so you cast your eyes along the grass, looking for rough patches that could add spice to an otherwise tame delivery. The opposition is mostly up in the circle, so anything played well will mean runs. Kevin Pieterson put emphasis on a good defensive stroke. In his mind, if he could keep out the bowler’s best delivery, anything less would be attacked. You have been patient, seen off the new ball and occupied the crease. Time to see how the bowlers will respond.

Called it. The captain has whistled at the man at point, they are getting desperate to get you out. Knowing who you are coming up against is key. It means you can have a rough idea of what your opponent is trying to do, and more importantly, how you can continue to win each moment. You know the new bowler is their ace of spades, their best weapon. You meet with your batting partner, new plan. “The runs can wait, they want to get us out. Time to lockdown”. You play your defensive strokes with confidence. You know their bowlers are getting restless and the longer you stay there, the more they will try variations to claim your wicket. You are batting, but truly manipulating how the fielding side plans their attacks.

Another One Bites the Dust

From the non-striker’s end you watch on as your teammate takes his mark. The bowler comes in with his slower delivery, it’s wide but your partner slashes at it towards point. The man takes the catch with ease. The moment is lost as is your partner, but you are still in. Seeing the ball hold like that shows anything can happen on this wicket. Best stay alert. Time to reset.

Running between the wickets for a quick two you hear the claps and cheers from your team on the sideline. You have reached 50 runs. You give them a wave and shake hands with your new partner at the crease, but your job is not done. Nothing changes. Each and every ball must be watched with eagle eyes. It only takes one mistake to send you back to the pavilion.

With the field back on the boundary and plenty of space in between, working the singles comes easy. Soon though, you feel the fatigue kick in. Every time you play a good shot, you are rewarded with a 17m sprint in full gear in peak summer heat. Your mind starts to wander too. It becomes harder to focus on each ball as it comes. You throw your bat at a few loose deliveries barely missing them. You try to reel yourself in but soon you see the ball whizz off the toe of the bat flat but fast to the man at cover. Time slows down. You watch on with tension as the ball arcs and drops just short of the man. The fielders drop their heads and it becomes clear just how close you were to giving it all away. Thank the cricket gods, drinks are being run out.

Cricket can often be riddled with superstitions. As a batter, following your own score is almost a certain jinx. As the overs tick over, a sixth sense, however, tells you that your score is nearing triple figures. Your batting partner is well aware but is not going to be the one to throw you off. You meet in the middle and he tells you,

“Carry on, do not change anything”

If you had not been practically running shuttles for the last 30 mins you might have the mental energy to read between the lines. You nod and take your mark, scratch it out and hear a boisterous,

A million thoughts flow through your mind but with a heavy out-breath you are calm. The bowler jogs in. Watch the ball. Watch the ball. It’s straight, you lean forward and feel the ball race of the bat past the bowler.

You take off and slide your bat across the crease, look over your shoulder and launch back for two. Each pump of the legs adds another tonne of fatigue to your shoulders. The ball is thrown in but you make it. Your teammates erupt into cheers and whistles. Drenched in sweat, you hold your bat high. You have done it. Countless hours of training had led you to this exact moment. The moment the previous 120 moments of the day had built towards. Relief and pride wash over, but the game must go on.

More time passes and with few deliveries left in the innings, you are settled but horrifically fatigued. The bowler pitches his next ball straight and a touch shorter than usual. You lean back and play a pull shot but the ball hits the deck and keeps low. You adjust but strike nothing but the stale air. You missed. The bowler did not. You. Are. Out. 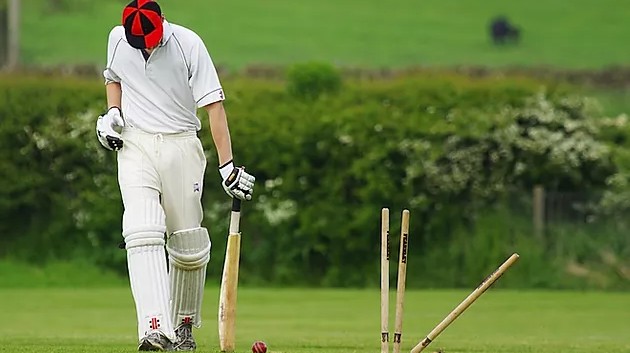 The Long Walk Back

Despite the applause welcoming you back to the pavilion you can not help but feel a little disappointed. You nod at your teammates but keep your head low. The walk back is always the longest.

In hindsight, that innings saved your team the game. All the moments you overcame helped lead your team to a Saturday victory that will not soon be forgotten. But there is no end to cricket. The following week you train hard, polish those shots you felt needed improving because no matter how many runs you scatter around Smallbone Park in Rotorua, the next week you will put on your pads and run out again with a 0* (0) next to your name. Three side steps, jog a few paces, shadow drives and defence shots, your routine feels good. Another week, another chance to catch the Centurion ghost.

About the Author: Curtis Painter - @CurtisPainter4

I’m a recently graduated Communication Studies student living in New Zealand. I’ve played for Lake Taupō Cricket Club and help with their write-ups in my spare time. There is nothing I love more than a well-told story and hopefully, I’ll break into the broadcasting industry soon!