On the 24th November last year Dominic Peter Sibley became the 694th player to receive an England test cap when Ex England captain Mike Atherton presented it to him on debut at Mount Maunganui in New Zealand.

One will find few similarities between the MCC coaching manual and Sibley’s technique. Before the delivery he takes a big step over to off stump and as a result he comes into contact with the ball very chest on; unusual for an opening batsmen. With a dominant bottom hand, he has a strong preference towards leg side stroke play, while scoring options on the offside sometimes appear restricted. Nevertheless, Sibley has achieved success at the highest level. Critical to this is that, despite his unorthodox technique, he is still at the point of release, getting his head in line with the ball and playing it right underneath his eyes.

After making an indifferent start to his test career in New Zealand, averaging just 12.66 with a top score of 22, he remained in the team for the first game against South Africa. His poor form continued at Centurion when he was dismissed cheaply by left spinner Maharaj.  The 24-year-old may have been starting to feel the pressure as doubts about his technique began circulating.

If there had been any doubt in Sibley’s own mind going into the Newlands test it was not reflected in his batting. Scoring an unbeaten 133 off of 311 balls in an expertly timed innings, he showed both determination and resilience. Both of these qualities had been lacking in England’s batting for some time, which made the 447 minute knock all the more enjoyable to watch. He left well, completely aware of where his off stump was and exercised patience against the spinner, nullifying any purchase off the wicket by padding the ball away outside leg stump.  When the bowlers veered off their line he punished them through the leg side. Having gone on to finish the series as England’s leading run scorer, he has now solidified his place in the side for the near future.

When asked whether scoring his first test hundred felt as good as he had imagined it would he answered “better I reckon, it is what I’ve been working towards since I was 13 or 14, you dream of that moment”. Ex England wicketkeeper and now Director of Cricket at Surrey commented on Sky Sports that he “knew [Sibley] was going to play for England, it was just a case of when”. Kenneth Mackenzie, Sibley’s grandfather, clearly agreed. In 2011 he placed 2 bets at 150-1 and 66-1 on his grandson to one day represent England. The family has since collected the £21,000 winnings. The bookies at the time may have seen this as easy pickings but, even at the age of 16, Sibley had given plenty of indications that his grandfathers prophecy would come true.

For all professional cricketers the journey to the top begins at a young age. It is no easy road and requires endless hours of dedication, commitment and sacrifice from player, parents and coaches. It was no different for Sibley, starting out aged 9 at Surrey, he quickly progressed through the system and often playing beyond his years. The first time those around the professional game might have heard the name Sibley was after he was selected to represent London and East at the infamous Bunbury Festival in 2011. At a tournament renowned for cherry picking the next generation of England cricketers, he scored 256 runs at an average of 85.33. For his efforts he received a record breaking five awards, including Player of the Festival, Top Run Scorer and Best Batsmen. In what was turning out to be a golden summer for the 15-year-old, this was just the beginning of his run scoring exploits. Two days after the festival he turned out for Ashtead 1XI in the Surrey Championship Premiership. Here he broke another record in becoming the youngest player to score a double hundred in the league. No mean feat in a competition that has been running since 1968. Fast forward two more weeks and he was in the runs again. This time for Surrey u17s in the national semi final against Worcestershire, he scored a mammoth 224 against a bowling attack consisting of boys two years his senior. All of this just a month after making his debut for Surreys 2XI. It appeared that the sky was the limit for the Surrey run machine.

Sibley was educated at Whitgift School in Croydon, an establishment notorious for its production of professional cricketers. They recently tweeted “very proud of @domsibley he is not bad at scoring 100s – would have scored a lot more if he was not playing for @surreycricket 1XI for the whole of his U6th”. The message was attached to a photo showing the 4 hundreds he scored for their 1XI. As alluded to in the tweet, he spent much of his final year at school playing for Surrey’s 1XI. In 2013 he once again etched his name into the record books when, in just his third first class game, he scored a colossal 242 against Yorkshire in an innings that lasted just shy of 10 hours. At only 18 years and 21 days old he became the youngest Surrey centurion and the second youngest Englishman ever to score a double century. The only man to have done it younger being WG Grace. At this stage the bookies would have been loosening their collars with Sibley being one of the most exciting young talents in the English game. 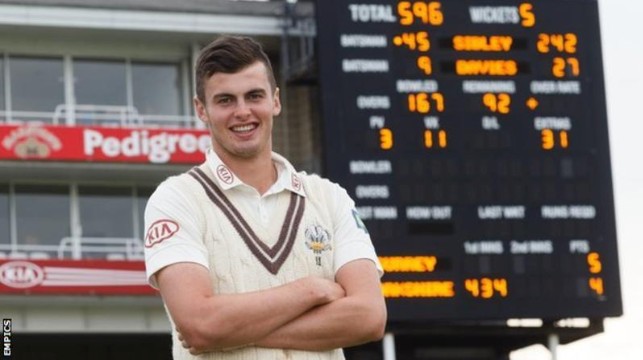 Sibley after his record-breaking 242 for Surrey. (c) Empics

From 2014 to July 2017, still a teenager for the most part, Sibley struggled to maintain a spot in the Surrey side and would only play 25 more first class games for them. With the addition of Scott Borthwick and Mark Stoneman to the squad, it looked as if regular 1XI cricket was going to be hard to come by. He turned down a new 3-year deal and instead chose to seek opportunities at Warwickshire. At the time Alec Stewart commented that he was “bitterly disappointed” by the decision. While Sibley has since said he has no regrets, the move did not instantly reignite his career in the way he may have hoped it would. In the first half of the 2018 season he managed to get passed 30 just three times in his first 20 innings. Memories of a child prodigy were rapidly evaporating as supporters called for the 22-year-old to be left out of their side and past dreams of England recognition now appeared wishful at best.

Broke down that door

However, Sibley was far from done breaking records. Arguably his most impressive achievement in his career so far came in 2019. Following a remarkable change in form at the back end of the previous season he notched up six hundreds in successive first class matches, becoming the first Warwickshire player to do so. He went on to score 1324 runs in the Championship at an average of 69.68 and has not looked back since. What impressed many observers even more than the volume of runs he scored was his ability to soak up pressure with the number of balls he faced, at 3,024 the next best in this category fell under 2,000. This was enough to convince England selectors that he deserved his chance in the test arena. So far he has rewarded their faith in him with 362 runs at 40.22. In Sibley, England have not found the next technically correct Mike Atherton. Nor a hard hitting opener like fellow Whitgiftian Jason Roy. But what they have found is a man with an appetite for scoring big hundreds, who understands the limitations of his own game and plays to his strengths.

The stage set for Sibley

Up next for the England side is the Sri Lanka series starting later next month. Fans will be hoping that, now in an England shirt, Sibley can continue his habit of breaking records.

About the Author: Jonty Logan - @jontylogan

Jonty is 21 years of age and is currently studying History at the University of Leeds. He played County Age Group cricket at Surrey and Kent and is now at Kent Premier League club Bromley CC. A massive badger with a passion for watching and playing cricket in all its forms. He graduates from university in the summer of 2021 and is seeking opportunities in cricket journalism.