“It’s the only time I feel equal to everyone else. For a short time, when I’m on that pitch, nobody gives me special treatment. And that’s the way I want it to be.”

The words above are from 17-year-old Jonathan Tiley. Like many young men and women, he is obsessed with sport. Cricket and football are his main loves, but it is the game of cricket that he is making strides in. Jonny currently plays for Mawdesley CC in Lancashire, in the Palace Shield Cricket League. He was about to break into their senior men’s sides this season before the Coronavirus hit, and devastated every sport out there. A promising off-spinner, he had been invited to train with Lancashire CCC last winter, and hoped to gain recognition there over the next few seasons. This of course has been halted indefinitely, until the green light is given to start playing again.

So what makes Jonny’s story different?

What differentiates Jonny’s story from the majority of other sportspeople are the challenges he has overcome to reach this stage. Born with Cerebral Palsy, Jonny’s lower limbs and left side have severe movement and coordination limitations. The result is a dominant right side, and means gripping the bat with his top left hand (he is a right-hand batter) is extremely difficult. Unable to walk without crutches until he was 11, Jonny’s earliest sporting memories are of bowling to his dad and brothers in a wheelchair in the garden, or batting on his knees. Jonny described the frustration of not partaking as he would like was excruciating, and jealousy would kick infrequently. This would include watching his brothers and friends run around in the garden, or his hero Graeme Swann taking wickets on the TV.

The summer of 2013 marked a change for Jonny, as he underwent a series of operations to be able to walk and move unaided. This list of procedures is frighteningly long. Jonny’s femur’s were broken and reset, his kneecaps twisted and moved into the correct position, his achilles were released, and his hamstrings lengthened to the correct size. His legs are now held together by plates and wires. Botox has since been pumped into his arms four times, in an attempt to give him more elasticity and movement. It would still be over a year before he could walk unassisted, and the pain as his legs began to set in place was indescribable. The list continues on to this day, as he regularly has to attend hospital for further check-ups and smaller procedures.

The initial process took over 6 months, and a total of 18 hours operating time. It was one of the first of its kind in the UK, and over 10 research reports have been written on the process and his subsequent recovery. Doctors informed him it would still be very unlikely that he would ever be able to play sport. His progress and the bar he has set since has been nothing short of miraculous. 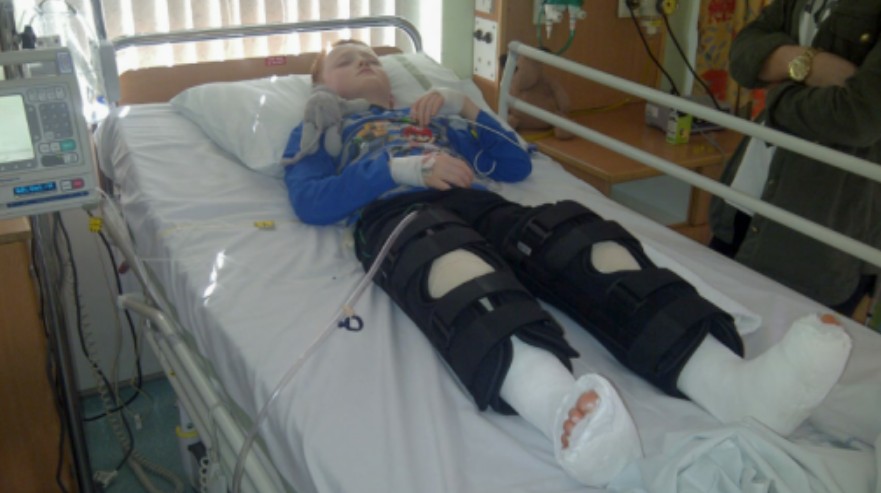 After a year of gruelling rehab, Jonny was in a different place. Now able to walk more freely, (or with the help of his walker), he was starting to enjoy cricket more and found he could partake more openly in the back garden games. However, he would still be confined to his wheelchair by the evening. Walking for extended periods of time was a tiring act and running was impossible. These are issues Jonny still struggles with today. But with a talent for the game, and enthusiasm in spades to match, the back garden dreams became a wonderful reality.

His Dad, Patrick, introduced him to Mawdesley CC, the closest team to his Chorley hometown with a dedicated coaching section for disabled cricketers. To give some perspective, Jonny is classed as a level 3 disability, with 1 being the least affected and 4 the most. Due to his movement issues, it would still be challenging for him to play against disabled players of a lesser graded level. However, his cricket skills impressed the coaches enough to put him in the club’s able-bodied u11’s team, and amazingly he is still yet to play a competitive game against other disabled players. In a fantastic twist, he would later spend days at school in his wheelchair or with his walker in a bid to be fresh and conserve his energy for cricket in the evening.

At first, Jonny admits it was impossible for him to adapt to the pace of the game. He would struggle to hit the ball when he batted, and his off spinners could barely reach the other end. Like many children that age, he was still building up the power to be able to play the game. He also had the added challenge of finding a style to get around the obstacles he faced. To this day he still bowls with no run-up, although he is working on potentially bringing one in. His power is generated from his upper body and wrist, and for his quicker ball he has to be careful not to bend his elbow too much.

Batting is a different problem entirely, and Jonny admits this is a work in progress. He struggles to balance, and generating power in his shots is hard, as he can’t move his legs into position freely. When he trained with the Lancashire Disabled Team last winter, the coaches opened his stance and he developed a trigger movement, to try and get more power back into the ball. For fielding, he generally stops the ball with his feet, which any cricketer will tell you is a painful thing to do. It’s one of the many little sacrifices he has to make. Fielding is the area he struggles with the most, but he is working hard on it to be able to contribute. 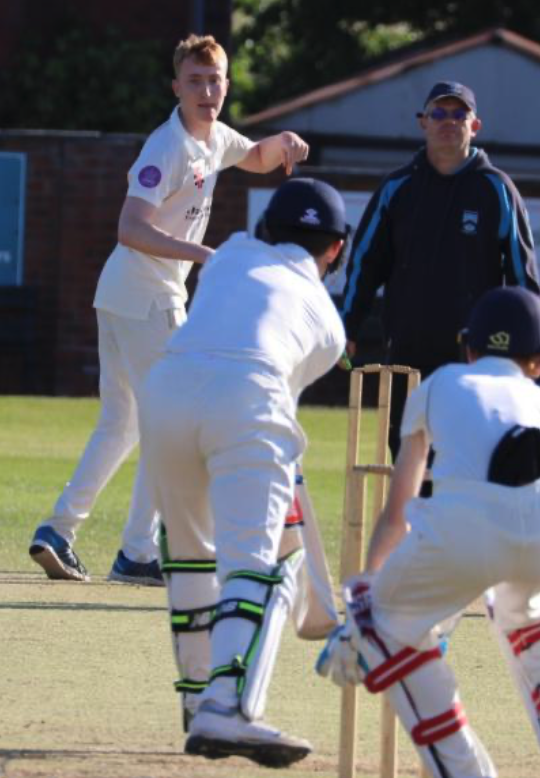 Through sheer perseverance and will-power, bowling has been the part of his game he has been able to adapt to. He took his first wicket in the u13’s, a year after he started playing. The mobbing from his teammates and the outpouring of emotion is something he said he will never forget. All those hours practising in the garden were beginning to pay off. Incredibly, only two seasons into his short career, he was named bowler of the year for his u13’s team. His stock delivery is now a genuine off-spinner, and he can get enough revs on the ball to get it to spin. He started to set plans for batsmen and think about the game more as his skills improved, and he has been the captain for his u13’s team and the u15’s team since. From the beginning, he has kept a diary of all his games, and has diagrams and field settings set out for certain batsmen he comes up against. The attention to detail is incredible, and it is a pleasure to see why is he is enjoying success. Although his body may not be able to do the same things as other players, the beauty of the game allows people to be outwitted as well as outfought.

Jonny admits to playing the game hard, and isn’t opposed to giving the opposition a word or two either. His first catch is his favourite moment in cricket, against a team he said “I can’t stand, they act like they own the place!” After a firm drive was hit off his own bowling, he caught it to his left, falling over in the process but determined not to drop the ball when his elbows hit the ground. It went against all the doctors advice (he has been warned not to dive onto his legs), but there was no stopping him at this moment. As a captain, he gives his teammates a dressing down in the changing room if he feels they aren’t giving 100%. After speaking at length to him, and seeing his determination and competitveness, I for one wouldn’t like to be on the end of one his hairdryers.

So, what next for Jonny (when cricket finally returns…)?

Once cricket resumes, Jonny will enter into senior cricket, which will present a whole different challenge to the juniors. For a start, he has only played 20 over games, so long days in the field will be tough. He is thrilled to bowl more overs though, so the prospect of this more than makes up for it. If his trajectory continues upwards, then recognition with representative disabled cricket for Lancashire and potentially England may come. In the modern world, there are more opportunities for disabled sports players, and it is a strong possibility that he may able to tour other countries playing the sport he loves. Originally it was about taking part, but you can now hear the confidence pour out in his voice when he discusses his own game. He now feels he can contribute to winning games – and he belongs on the pitch alongside both able-bodied players or disabled players. Sport is the one place as a disabled person he doesn’t feel judged or treated differently, and nor does he want to be. No quarter is given, and none is expected in return.

Sport is the great leveller in society; a place where any person can dominate on their day. As soon as you cross that line, the competitive nature of the game takes over, and you can leave everything behind. Following the current state of affairs, none of us will take playing sport for granted again. For Jonny, it was never taken for granted in the first place.

About the Author: Tom Foster

The current captain of Birkenhead CC in the Liverpool Comp, Tom has also been the professional at Adlington CC and captained Leigh CC. Away from Cricket, he holds an Undergraduate Degree in Creative Writing from Liverpool John Moores University and is currently studying for a Masters Degree in Journalism. He also has played 3 winters abroad playing club cricket in Melbourne and Brisbane and will do anything to avoid getting a real job.