We’re often asked, “who is your best Pro”.

It’s a question that will crop up a lot, the closer we get to the upcoming season.

So, we thought it’d be worthwhile pulling together a side of our best pro’s, who are still available and seeking UK clubs for the 2020 season.

There was serious competition for places, particularly in the seam bowling department, but check out our top XI below.

Without doubt, one of Sri Lanka’s brightest batting stars who recently finished as the second-leading run-scorer in the recent (Jan 2020) T20 domestic competition (322 runs at 64.40). A prodigious opening batter (who keeps wicket), Madushka dominated at Sri Lankan Under-19 level and was fast-tracked to the Emerging Players side for the recent (Dec 2019) South Asian Games Men’s Cricket Competition. He has scored runs aplenty at all levels and is now seeking his maiden UK stint in 2020. 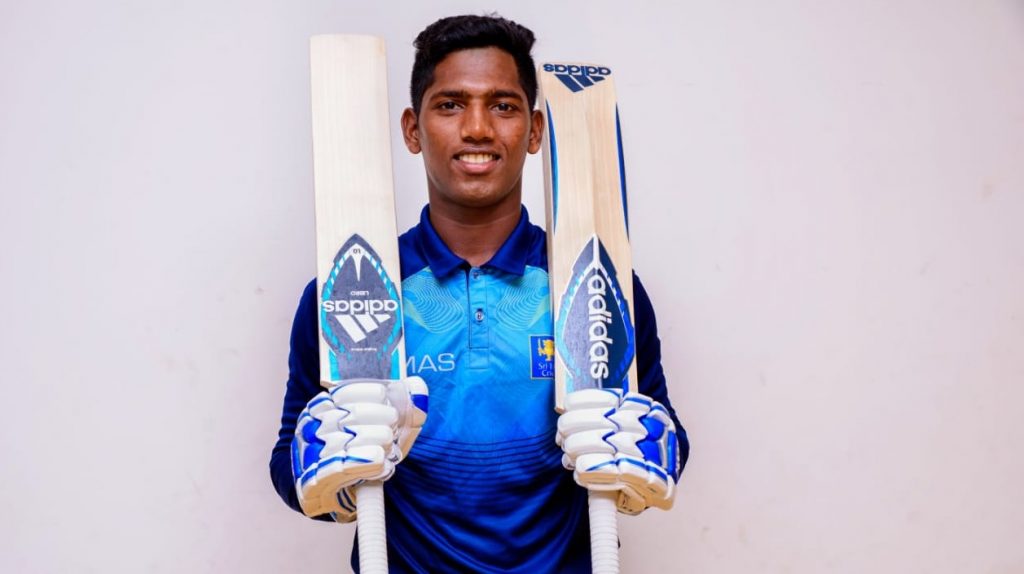 Nishan Madushka was on fire during the recent T20 domestic competition (322 runs at 64.40).

Many will say this is a “surprise” pick, but we reckon Nimanda ticks every box as the ideal league pro. An explosive bat, capable of opening the batting, or bludgeoning it from the middle-order. He also doubles as a genuine opening bowler, will all the skills under the sun. Ideally suited to T20 cricket, he has been a star-performer in SLC’s T20 tournaments over the past two seasons. Last year, he averaged 38.66 and 24.42 with bat and ball respectively, to include a match-winning 23-ball 47 with 4 sixes in the final, to guide his side to victory off the final ball. In January 2020, he impressed again, this time predominantly with the ball, taking 11 wickets at 9 with an economy of 5.25 in the T20 competition.

Skippering the side is none other than Kerala captain, Mr. Sachin Baby. He has captained Kerala for several seasons and guided his side to their first-ever Ranji Trophy quarter-final during their record-breaking 2017/18 campaign. The former IPL star is a run machine, with neigh on 7,000 domestic runs and 9 centuries. He is also a useful, but often under-used, spinner who would be quite the handful in UK league cricket. With access to accommodation in Guildford (Surrey), Sachin represents a high-class overseas signing for 2020. 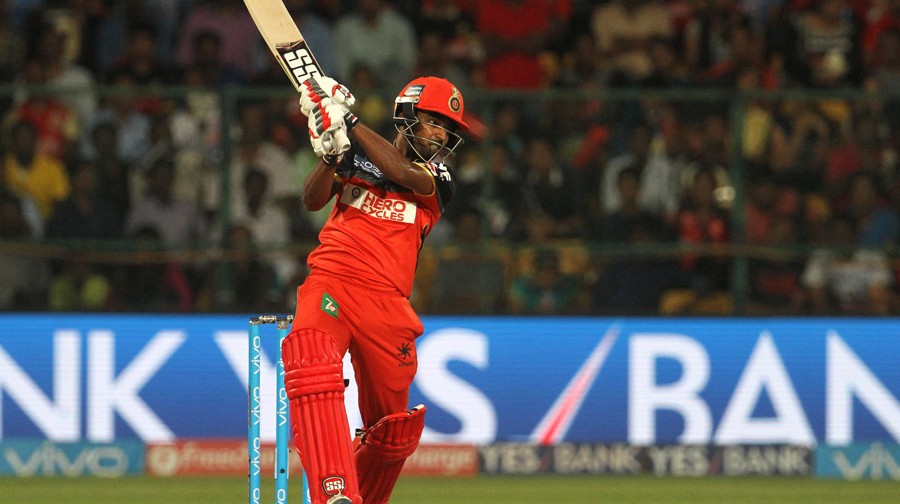 Nielsen is an exceptionally talented wicket-keeper batter playing for South Australia and the Adelaide Strikers. Son of former SACA legend and Australian Head Coach, Tim Nielsen, the prodigy has played 34 matches across the three formats to date and boasts impressive numbers, averaging 25.44 (FC), 32.00 (List A) and 19.60 (T20), to include a best innings of 105 on his Sheffield Shield debut. Holder of a British Passport, the Strikers star is open to a UK return in 2020.

The middle-order has some fire power with the inclusion of recent record-breaker, Leo Carter. The Canterbury Kings batter recently became the first player in Super Smash history to hit six sixes in an over as he took full toll against Knights bowler Anton Devcich at Christchurch’s Hagley Oval (footage from Sky Sport New Zealand). Holder of a British Passport, Leo is potentially seeking a return (ideally down south) to a club offering ECB Premier cricket.

Our “wild card” selection – picked purely on talent, rather than domestic numbers. A genuine quick and explosive batter, such was his promise, the all-rounder was picked to tour Zimbabwe with the Sri Lankan Emerging Players in August 2016 – making his first-class debut against the Zimbabwe Development XI. He has since represented the Sri Lankan Board, Development and ‘A’ sides before playing his solitary ODI match for Sri Lanka against Bangladesh, taking figures of 3-26 in January 2018. He followed up with two T20 matches for his country in February but hasn’t featured since. The explosive all-rounder is an exciting recruit for any UK club in 2020. 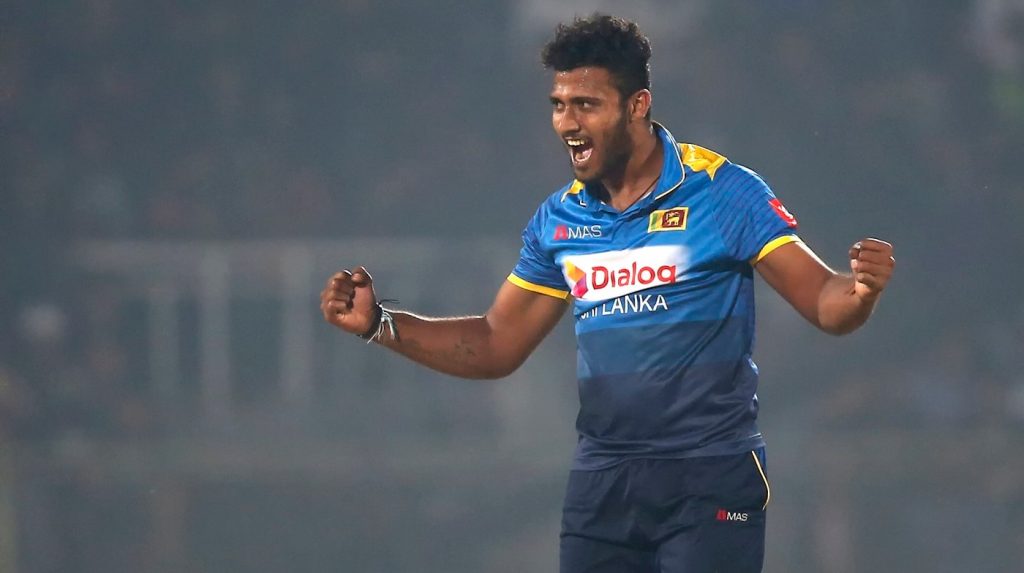 Without doubt, one of the hottest spin bowling prospects in Sri Lanka. Playing for Nondescripts, alongside the likes of Angelo Mathews, Mahela Udawatte, Upul Tharanga, and Lasith Malinga, the Sri Lankan Emerging Players (U23’s) star has excelled in white-ball cricket to date. The leg-spinner ripped up the recent SLC Invitation Limited Over Tournament (December 2019) taking 16 wickets at 17.63, then did likewise in the T20 tournament (January 2020), finishing second on the wicket-charts to Malinda Pushpakumara with 14 wickets at 11.14.

One of the best performing seamers in Indian domestic cricket right now. 25 wickets at 16.40 in Ranji Trophy cricket this summer, to include best match hauls of 7-81 (v Maharashtra), and 8-35 (v Tripura). The Haryana opening bowler also starred during Haryana’s T20 campaign taking 10 wickets at 19.80.

There we several players that could easily have made the cut, so have featured a few of these below. 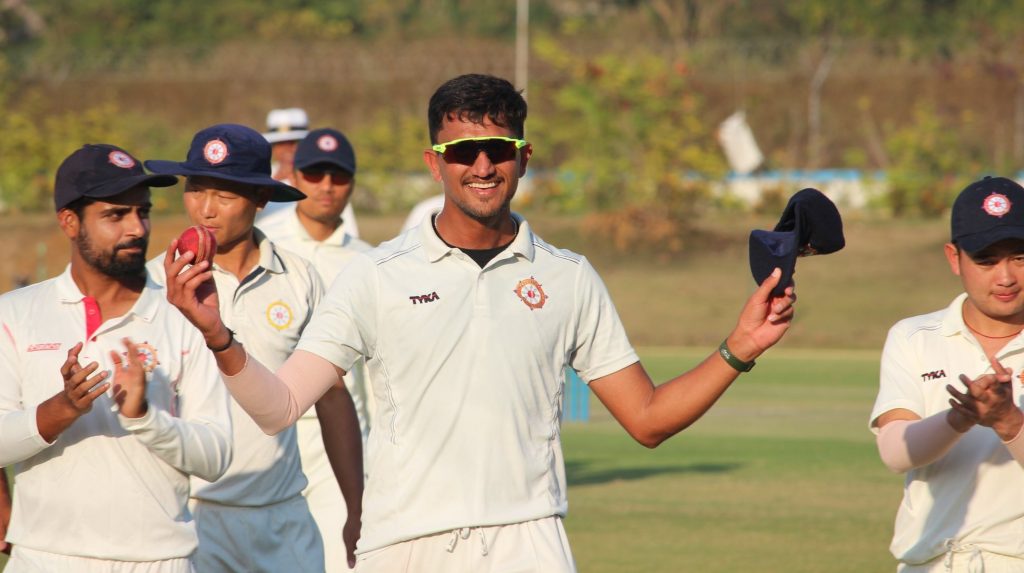 Ishwar Choudhary celebrating his recently first-innings figures of 3-39 (13) against Mizoram.

Lahiru Gamage is an international quick who represented Sri Lanka in 5 Tests (2017-18) and 9 ODIs (2014-17). Whilst he hasn’t featured since 2018, he continues to excel for recent T20 champions’ Colombo Cricket Club. Gamage has taken well over 400 domestic wickets with 13 five-wicket bags and 2 ten-wicket match hauls. He has been particularly impressive since the introduction of T20 cricket, taking 55 wickets at 19.40, with an outstanding strike-rate of a wicket every 15.8 balls and an economy of 7.34.

Samad is, quite simply, a legend of Maharashtra cricket. The stalwart is approaching 200 matches for the State across the three formats. He boasts 400 plus wickets with 15 five-wicket hauls. The left-arm quick, who has been on the national radar with India Green and West Zone inclusion, has also dominated UK league cricket for both Colwyn Bay in the Liverpool League (2014-15) and Oxford in the strong Home Counties Premier League (2016-17, 2019). During his five-season stint, he took 266 wickets at 12.88 with 23 five-wicket hauls, a strike-rate of 24.89 and an economy of 3.11 runs per over – simply outstanding stats from the overseas seamer. 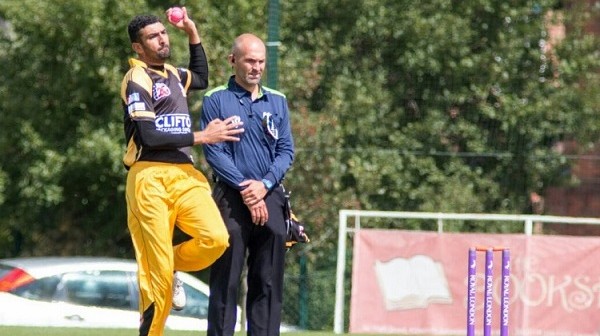 Sadaf Hussain has been simply outstanding, both home and abroad, over the past decade.

Gayan is a veteran left-arm spinner who has lorded Sri Lankan domestic cricket for nearly two decades. He is currently the fifth leading wicket-taker in Sri Lankan first-class cricket with 615 wickets at 19.57 to include an incredible 52 five-wicket bags and 20 ten-wicket match hauls. Gayan has also starred in the UK for Eppleton (2007 – Durham Senior League), East Molesey (2014 – Surrey Championship), and Hornchurch (2019 – Essex Premier League). The highlights – topping the Championship Division 1 wicket-charts for Molesey (52 wickets at 12.25) and 62 wickets at 14.56 in league/cup cricket for Hornchurch last summer.

Fancy signing one of these legends?

All the above players are seeking UK clubs, so if you’re interested, please get in touch to discuss.