The Ground We Stand On

The Ground We Stand On

I struggle to think of many sports that can be so influenced by the ground it is played on. Not a  stadium or arena, but the 10 millimetres of matter between your feet and the Patumahoe clay holding it together. Cricket is a unique sport, it presents itself as any other game, but countless variables play into how a match will unfold.  I have recently learnt the greatest variable is the pitch. Yes, that 20.12 metres of finely groomed grass that you scuff up each week in your gameday endeavours. It is the stage every scene is acted on, and I found myself with little knowledge about its works.

Restricted to the boundary ropes of my own fence line, quarantine had opened up the time to pursue my virtual cricket career on my humble gaming console. Captaining my digital Northern Defenders side, I was given a visual of the pitch, won the toss and elected to bat on a “Green surface with moderate cracks”. Upon making my selection I was berated by the cartoon commentators, ridiculing me for such an awful read of the ground. Never had I been so humiliated. I needed to investigate further, I needed to find out about the grass and how I could read it better to avoid another bombardment of criticisms from Mike Howard and his virtual commentary crew.

I reached out to Shaun Davies, the Assistant Turf Manager for FMG Stadium Waikato. In the past, Shaun had worked on the pitches at Eden Park, Auckland for the 2015 World Cup, so I felt like he was the right man to go to with my queries. 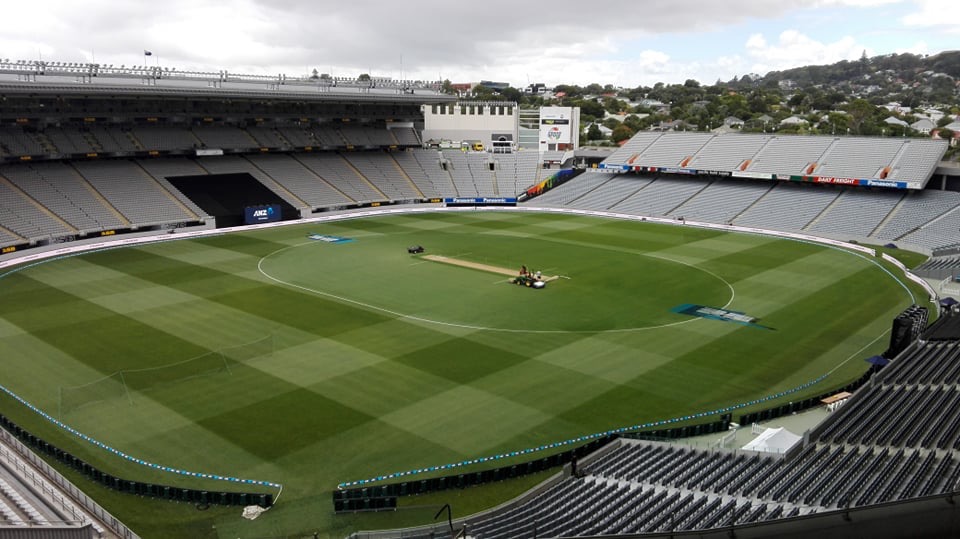 He told me the biggest elements to a pitch are the grass on top and the clay underneath. In New Zealand, we typically use ryegrass, it better suits our climate and offers a visually green wicket. When paired with a Patumahoe clay block, you get a typical New Zealand pitch. This may not seem like rocket science, but as I fell into the rabbit hole of pitch management it became clear it was not far off.  Moisture on the block and weather will also influence the performance of a pitch and how it can be maintained, so an eye to the sky is needed too, a wet week will delay pitch maintenance. Crafting the ideal pitch is a true balancing act, trying to find the appropriate amount of grass, how it is treated, rolled and so on. Too much grass? The ball will stick when it hits the turf. Too little grass? The ball will likely keep low and turn more. And… if your block has an uneven grass coverage, then you have a jack-in-the-box surface as unpredictable as a surprise visit from the in-laws. 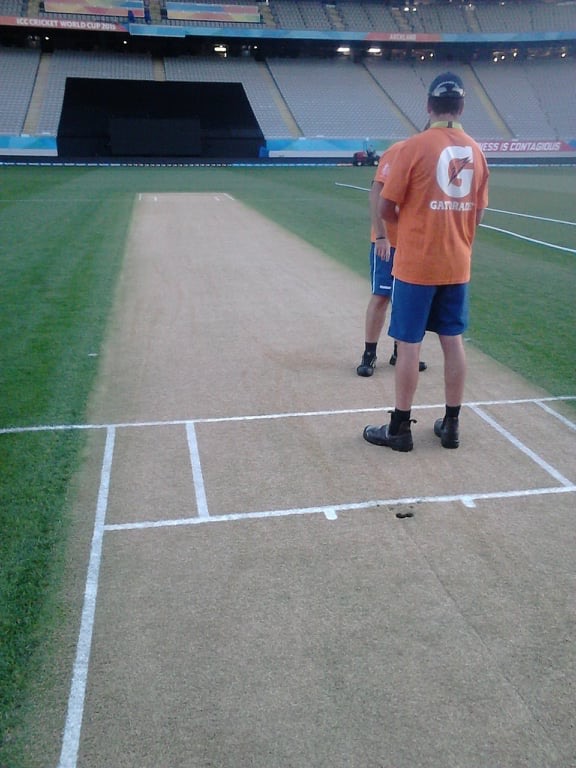 Having no two blocks the same makes it impossible to have the perfect formula that will always create the ideal surface. I do not even mean across countries, I am referring to a local level. The basics are of course the same, but grass in one humid city will likely behave completely different to the grounds of say, sun-soaked Mount Maunganui. I asked Shaun what the criteria are for pitches in New Zealand, I wanted to see if these variables are encouraged. Shaun mentions that New Zealand Cricket (NZC) generally want groundsmen to produce surfaces with pace and bounce. That being the case, crews are free to achieve that goal by their own means, resulting in each ground having their own spin on the standard recipe for cooking up a quality pitch.

However, the product of New Zealand’s ground efforts has landed us in hot water in the past. Shaun described a period in the early 2000’s when India toured New Zealand and played on wickets that left India in tatters. The series he was referring to was India’s shocking 2002-03 tour that saw just two team scores of over 200 in 14 ODI innings, a small score in today’s standard of explosive cricket. New Zealand tried to craft wickets that India would struggle on,  wickets Stuff writer Ian Anderson described as “…towards a shade of green in which Kermit could have been camouflaged.” NZC paid a price for this series, with India not visiting our shores for six years. That left groundsmen scrambling to adjust their grounds, presenting wickets that swung to the other extreme, producing big scores with little to favour bowlers. Shaun now finds himself working on grounds that aim to find a balance between the two situations.

As exciting as Watching Grass Grow…

Do not let the heading fool you, turf management is truly fascinating. There is so much to consider and maintain when working on cricket grounds. Shaun will begin work on a surface 20 days before it is played on! Each day maintaining and monitoring its progress and growth. 12 days out from gameday, Shaun begins rolling the block for two hours a day. It will take 2-5 minutes to reach the end of the pitch, a very slow process. This ensures the clay is compact. In the coming weeks, the grass is monitored, sprayed, groomed and trimmed to 10mm, any lower and the surface may be compromised. I like to think of this as the ultimate two-week hair cut. In the few days before match day, the colour of the grass is adjusted with techniques such as quick-rolling and brushing that leads to the tan-brown colour you see on game day. In some cases, crews will start their preparations four weeks in advance to gameday, pretty crazy to think of all the time and effort that goes into these grounds. Four weeks later, a pitch at club level has played its part and is not used again that season. Pitches used for higher level matches will only be used once or twice. 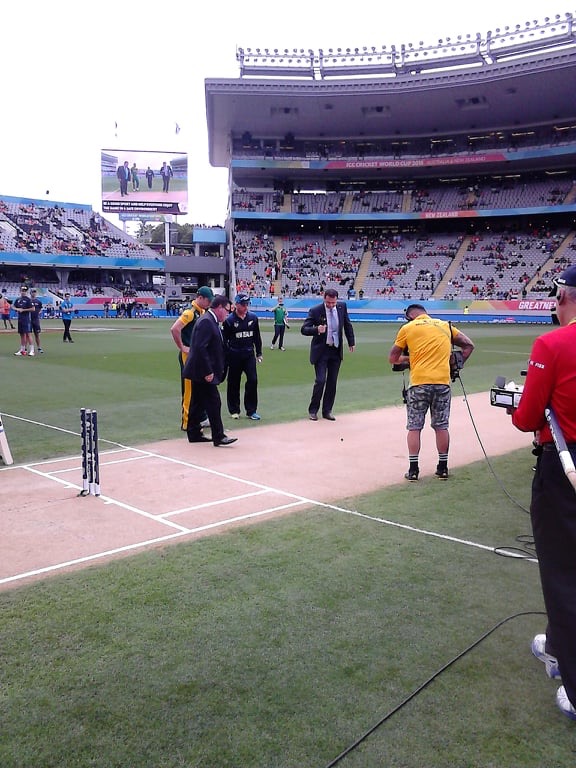 The irony with cricket grounds is despite that the game is generally only played in specific circumstances over the three months of summer, the grounds require year-round maintenance. Throughout winter the block will be monitored so it survives the harsh rains and then spring is used to roll out the block to trap moisture and level the surface before the summer heat rolls around again. Despite all these preparations, if the weather is not good enough, the game will not go ahead. The weather can also hinder or eliminate any work done to the ground if it is not managed appropriately. Imagine this, you wake up each day and go about your groundskeeping duties. You measure the grass to the millimetre and spend hours rolling the surface in peak heat as the sun helps your outcome. However humid conditions soon take effect and you notice disease has started to spread on your surface. One week passes and all your hard work has been in vain, the pitch is ruined.

The ongoing maintenance of the ground is clearly hard work and with so many influences and variables, it is a craft that needs constant reflection. Shaun will often watch matches played on his grounds and talk with players and take notes to find ways to fine-tune his procedures. Like motorsport where each race is a chance to fine-tune a car, managing a cricket ground is a never-ending effort to produce the best possible ‘stage’ for the players.

With my new knowledge of pitch management, it was important I understood how to implement it into reading the pitch as a player. Every team is different, so every captain should have a certain approach to different surfaces. Generally speaking, here are a few things to look at when analysing a pitch: 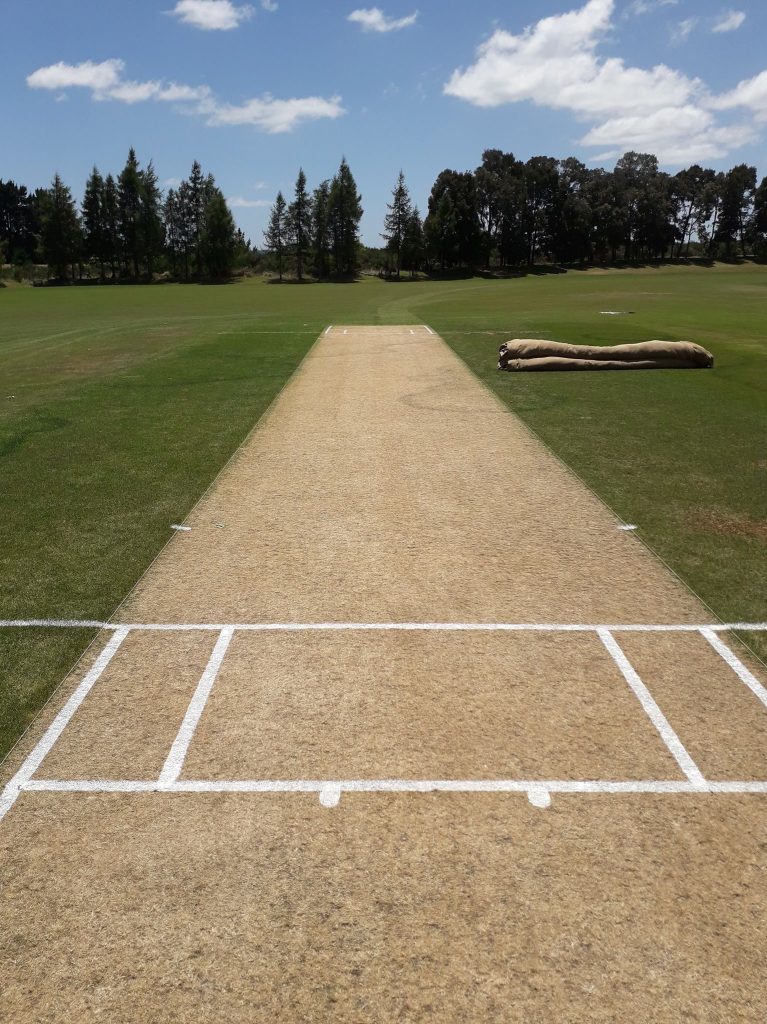 I have learnt that managing a turf is a constant juggling act, balancing expectations and limitations to your ground. My journey to better my own knowledge of pitches has shown me just how dedicated groundsmen are to deliver the best surfaces for us to play on. Shaun Davies has admitted cricket grounds are the biggest challenge both physically and mentally, and considering he has worked on grounds for All Black tests, football matches, the NRL Nines, Rugby World Sevens and of course Cricket World Cup 2015, I do not take his statement lightly. I think we can all learn from the efforts of our groundsmen. As players and fans of the game, we can often lose sight of these unsung heroes who truly take pride in producing a pitch that makes our Saturdays that much better. So next time you see someone maintaining your club’s ground, give them a wave because even in these uncertain times, those men and women are out there making sure the grounds we play on are fighting fit for when next season rolls around…

About the Author: Curtis Painter - @CurtisPainter4

I’m a recently graduated Communication Studies student living in New Zealand. I’ve played for Lake Taupō Cricket Club and help with their write-ups in my spare time. There is nothing I love more than a well-told story and hopefully, I’ll break into the broadcasting industry soon!