Understanding The Hundred: the what, not the why

Understanding The Hundred: the what, not the why

The summer of 2020 will see the ECB launch the inaugural edition of ‘The Hundred’. The concept is new, different and a hot topic of cricketing conversation, whether you support its existence or not. We could debate whether The Hundred should be here to stay, or if it is merely innovation for innovation’s sake. But it’s happening. Here’s your guide to understanding how it will work.

The ECB’s desire to reach out beyond the average county supporter is strikingly clear, purely in the franchise names. Of the eight franchises, no county is embedded in any team name, and three franchise names feature the city in which they are based. This follows the commercial decision made by Warwickshire in late 2013 to re-brand their t20 team as the ‘Birmingham Bears’. Speaking at the time, the then chief executive of Warwickshire C.C.C, Colin Povey, told the BBC that the change was an attempt to ‘get more people through the gates and attract a new audience’. That is exactly what the ECB are now trying to achieve with The Hundred.

Squads are set to total 15 players, of which three may be overseas players. With modern-day greats including Steve Smith, AB De Villiers and Virat Kohli reportedly keen to play in the new tournament, we can expect star-studded sides taking shape by the close of business on 20th October, when the player draft takes place. Sky Sports will broadcast the draft live, and will also televise the games, in conjunction with the BBC who are showing 10 men’s games and 8 women’s games.

The women’s teams are not part of the draft, though. Instead, they will have a ‘bespoke player selection process’ with an ‘open-market system’. During this process, teams may sign one further centrally contracted England player.

The men’s franchises can sign up to two players from each of the seven salary bands. Each team can also pick a wildcard from eight highly performing players in the Vitality Blast.

Players can select a reserve price, but if that amount is not met, they are not selected by any team. 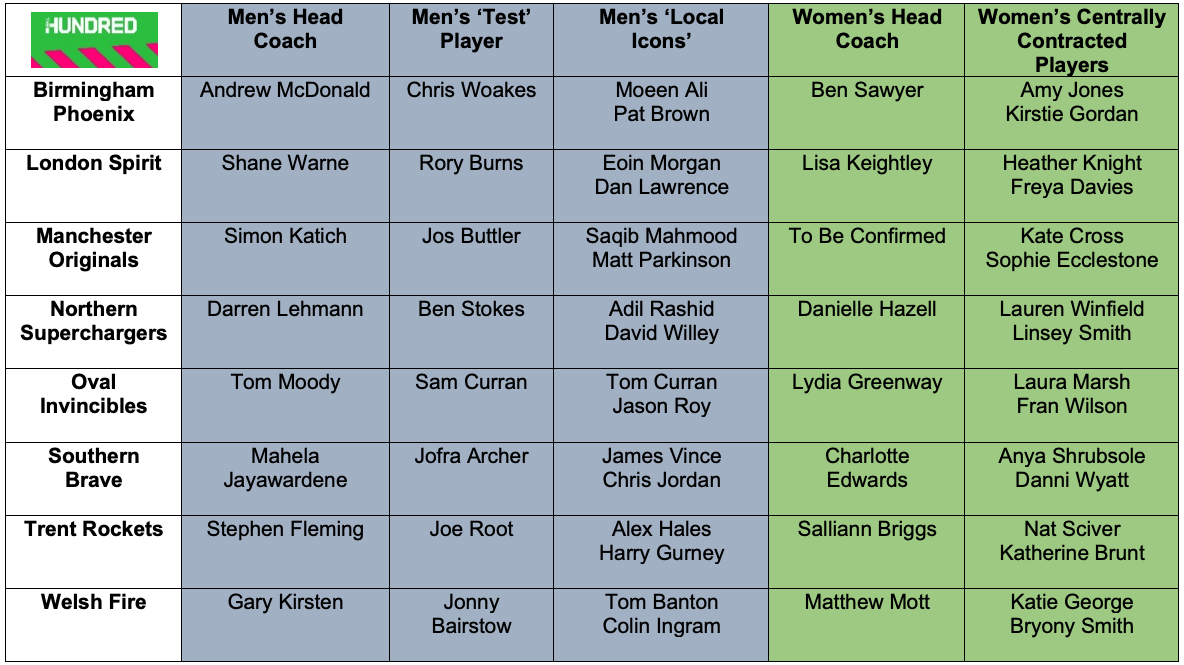 When is The Hundred?

The tournament kicks off in July 2020, with the hope that scheduling the fixtures in the summer holidays will encourage more of a family atmosphere. This model is similar to Australia’s Big Bash which attempts to get more families in the stands by hosting their flagship competition during the Christmas holidays.

To find out more, visit https://www.thehundred.com/