Kevin Koththigoda is Sri Lanka’s latest “mystery spinner” and someone with a degree of buzz around.

He boasts a direct resemblance to South Africa’s Paul Adams’ ‘frog in a blender’ action, albeit bowls right-arm, not left-arm chinaman like Adams. 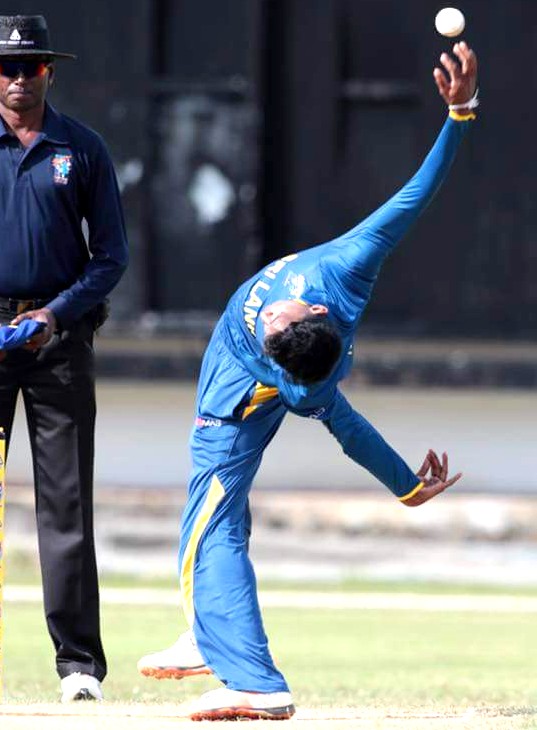 Koththigoda was part of Sri Lanka’s Under-19 side that played in the Youth Asia Cup in Malaysia in November 2017 and his action sparked plenty of media attention.

Hailing from Unawatuna, Koththigoda represented the prestigious Richmond College, but given Wanindu Hasaranga’s prominence, he later switched to Mahinda College to get more time at the bowling crease. His move clearly paved way to a Sri Lankan Under-19 re-call, then subsequent selection for Galle in all forms of cricket in 2018/19.

More than just a bowler…

Whilst recognized for his unique bowling action, Koththigoda is a talented middle-order batter who churned plenty of runs at College level. He has also shown glimpses of his ability at domestic level, with a highest score of 60* from the number 7 position in Galle’s side that features the likes of former international spinner Suraj Randiv and CricX legend Gayan Sirisoma.

Seeking opportunities abroad, Koththigoda has recently signed with Buckingham Town, following in the footsteps of fellow CricX tweaker, Tharindu Ratnayake who starred for the club in 2019. He is hoping to bamboozle the Home Counties Premier League batter with his unorthodox action, whilst score a few runs along the way.

Much will be expected of the talented Sri Lankan prospect who comes highly recommended by numerous sources, including his former coach, Dhammika Sudarshana.

The Sri Lankan sensation in action.