Dorking has pulled off a coup by signing Zimbabwean international, Tony Munyonga, for its 2020 Surrey Championship campaign.

Tony is an exciting all-rounder who recently broke into the national side, less than 2 years after his domestic debut.

An explosive batter who bowls off-spin, Munyonga was selected for the Twenty20 Tri-Series against Bangladesh, Nepal, and Singapore in September 2019.

In the last of his 5 matches, Munyonga finally had the opportunity to contribute and he did just that, striking a 33-ball 44 to help Zimbabwe chase down Singapore’s 167 inside 19 overs.

Munyonga’s selection was based on promise more than domestic performance. But, he rewarded the selectors and now looks set for a bright future for his country.

The all-rounder’s journey started in November 2017, when he made his first-class debut for the Rising Stars in Zimbabwe’s Logan Cup competition. In February 2018, he made his List A debut in Rising Star’s victorious Pro50 Championship campaign – Munyonga was named “Player of the Series”.

In April 2019, he was named in Zimbabwe’s ODI squad for their series against the United Arab Emirates, but he didn’t feature. 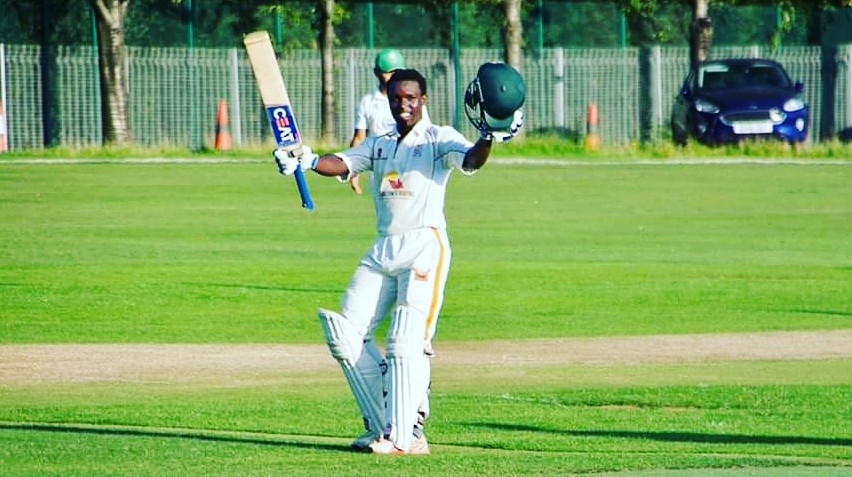 Tony celebrates scoring a hundred for Rockingham Colliery in 2019.

Instead, he headed to the UK where he played for Rockingham Colliery in the strong South Yorkshire Cricket League (Championship Division). He produced excellent returns, striking 734 runs at 43.18 and taking 31 wickets at 18.30.

Dorking snap up the Zimbabwean star

The all-rounder, who is now part of Zimbabwe’s long-term plans, has recently signed with Dorking for their Surrey Championship.

He has big shoes to fill, though, as he replaces Bradley Erasmus who struck 2,314 runs at 70.12 during his two-season stint with the Division 2 club.

Nevertheless, the talented Zimbabwean is eager to impress for Dorking, as he did with Rockingham during his maiden UK stint last summer.