Swanepoel is an exciting pace bowling all-rounder who made waves in South African domestic cricket last summer. His success culminated with the 2019/20 CSA Cricketer of the Year award.

Season highlights included his blistering 188 not out (from 169 balls with 16 fours and 8 sixes) against KwaZulu Natal and a sequence of 5-wicket hauls against Eastern Province (5-84), Northerns (5-40), and his career-best against North West (7-50).

His exploits for Northern Cape resulted with Franchise inclusion in January 2020, playing a Knights first-class match against the Lions.

He was then selected to represent a CSA Invitational XI against the touring England side a few weeks later, where he produced notable performances in both games – 2-42 and 2-58 / 25* (20), including the wickets of Denly, Ali, Woakes, and Curran. 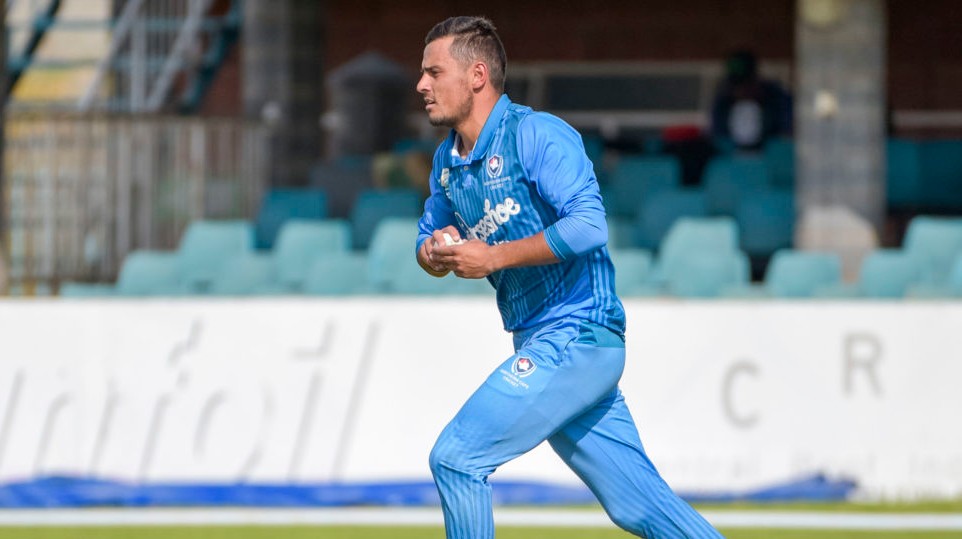 Beyers en route to another wicket.

From promise to performance

The right-arm seamer and explosive left-hand batter is now delivering the promise that saw him represent Northerns through all age-groups, the Titans Cubs, and South African Universities.

For the latter, he was their leading wicket-taker during the South Africa Emerging Players Tri-Series in June-July 2019.

Following his 2019/20 domestic season, Swanepoel was excited to return to the UK having signed with reigning Cornwall Premier champions’ Penzance for their 2020 season.

Unfortunately, COVID struck, putting pay to his Northern shores return. Nevertheless, the club was swift to defer the agreement through to 2021.

Swanepoel has previously spent a season abroad with Anston in the Bassetlaw and District Championship.

Speaking about the signing

“Penzance welcome the young South African into their dangerous line up for the 2021 season. The 22-year-old has already established himself as a strong regular in list A and first-class cricket. He made his debut for the free state in the 2016/17 season and List A debut the following year.

2019 has been Beyers’ breakthrough season, after signing for the Northern Cape he has taken the domestic scene by storm. With a top score of 188* and best figures of 7-50, need we say more on the ability of this quality all-rounder?

Beyers’ sheer pace and skill with the new ball will suit our hard-pacey pitch and be sure to provide some thrilling spells for our spectators. To complement his bowling, his excellence with the bat will be sure to continue to help obliterate bowling attacks at St. Clare in the coming season.

Beyers’ professional all-rounder status will bring not only bring extreme excitement, but it will demonstrate to our junior section how a first-class player trains and performs…another role model for our junior section!

He added: “It’s a massive honour for me to sign with Penzance cricket club. Seeing the club winning trophies makes me feel at home already. Really looking forward to meeting all the guys and doing my part!”