Skelmanthorpe has been forced to switch pros, following Jehan Daniel‘s decision not to honour his contract due to the pandemic.

However, Daniel’s loss has been Kasun Madushanka‘s gain, as the former Sri Lankan A seamer is now set for his second UK stint in 2021.

Madushanka is a high-class quick playing for the star-studded Tamil Union Cricket and Athletic Club in Sri Lanka.

The right-arm seamer boasts an impressive domestic record, with over 250 wickets to include 189 at 29.15 in 71 first-class games.

Whilst known for his skills with the ball, he has shown glimpses of his batting ability with 2 first-class half-centuries and a highest score of 78. 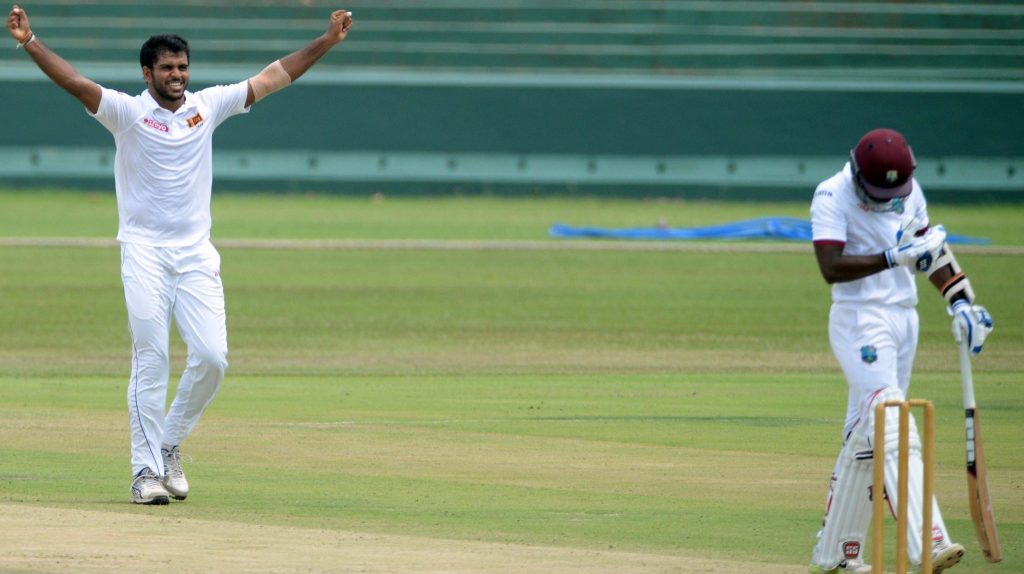 Kasun bags a wicket for Sri Lankan A against their West Indies counter-parts.

A former Sri Lankan Under-19 star, Madushanka has represented the Sri Lankan Emerging Players, Under-23s, Under-25s, and various Board XI’s over the years.

In October 2016, he was picked for Sri Lanka’s tour of Zimbabwe but didn’t feature. Nevertheless, he’s been in the mix since, to include an “A” match against the touring South Africans in July 2018.

Madushanka is a highly respected player in Sri Lankan circles and was set to return to the UK in 2020 to play for EAPL side Horsford before COVID struck. This would have been his second UK stint, following his maiden season for Lancaster in the strong Northern ECB Premier League (47 wickets at 15.02 and 349 runs at 19.39).

Nevertheless, the Sri Lankan paceman is now sent on that second UK return having recently signed with Skelmanthorpe for their 2021 Drakes Huddersfield Cricket League campaign.

Much is expected of the talented quick, who comes highly recommended by various coaches, including former Sri Lankan High-Performance Coach Simon Willis.