Chris Silverwood – the ‘outstanding candidate’ who fought off the very best

Chris Silverwood – the ‘outstanding candidate’ who fought off the very best

“Test cricket is really important to us in this country. We haven’t neglected Test cricket for white-ball cricket but the focus has definitely been more on that side and we just need to redress that balance now.”

They were the words of England team director Ashley Giles just two weeks after England’s dramatic triumph over New Zealand at Lord’s to clinch the World Cup, in the words of Ian Smith, ‘by the barest of margins’.

For that day alone, out of the four years of his reign, Trevor Bayliss will forever go down in English cricket history. It’s not often you can say that about an Australian but it has been well documented how he, alongside captain Eoin Morgan, reinvigorated England’s white-ball setup. This was a team that, at the last tournament in 2015, failed to beat any Test-playing nations and progress past the group stage.

There were rocky spells along the way – think humiliation at the hands of Scotland or even defeat against Sri Lanka in the 2019 tournament which seemed to all but kill hopes of progressing to the knock-out stages. But the resilience shown by the players is not only a testament to their character but to the belief, they had in Bayliss. This was a man they trusted and would work endlessly for.

Critics of his reign will argue that Test cricket took a back seat and therefore decline during Bayliss’ tenure. Bayliss himself has said on many occasions that in the 18 months or so leading into the tournament, the focus was winning the World Cup on home soil, an opportunity that doesn’t rear its head too often. For the summer it gave all cricket fans, old and new, I think few would complain at that.

Results under Bayliss had been patchy at best. One Ashes win with two Ashes defeats.  Home triumphs over South Africa and West Indies. Away defeats at the hands of India and New Zealand. Quite literally a time of highs and lows with the red ball in hand. The statistics speak volumes of England’s stagnation in Test cricket during Bayliss’ time in charge.

The former Sri Lanka coach had always maintained he would see out the remainder of his contract, which ran until this summer’s Ashes, and no more as he plans to return Down Under. This left Giles and the ECB with a big job on their hands; trying to find someone to revitalise England’s fortunes in Test cricket whilst continuing to build-on Bayliss’ white-ball success.

Interest in the role was high with decorated names within the coaching circuit like Mickey Arthur and Gary Kirsten rumoured to be interested. Add to that mix the likes of the new kids on the block in Jason Gillespie, who after spells with first Yorkshire and now Sussex is well-versed in the English county game, and England fast-bowling coach Chris Silverwood, Giles had a shortlist full of star names.

Kirsten, by far the most decorated candidate, appeared to be the frontrunner for the role. The former South Africa opening batter led India to World Cup triumph in 2011 and oversaw South Africa’s rise to the top of Test cricket the following year.

However, it is understood he was reluctant to take on the role of both head coach in Test and white-ball cricket with the workload it would entail. ECB chiefs reportedly spent time trying to convince Kirsten that his work could be managed with two assistant coaches but by then their interests had turned to the relatively unfancied Silverwood.

In many ways, it shouldn’t come as a surprise. Giles was always keen to appoint an Englishman to lead the national side (whether that matters is perhaps a discussion for another time) and since joining Bayliss’ backroom staff in January 2018, Silverwood has been key in establishing the current dressing room culture. 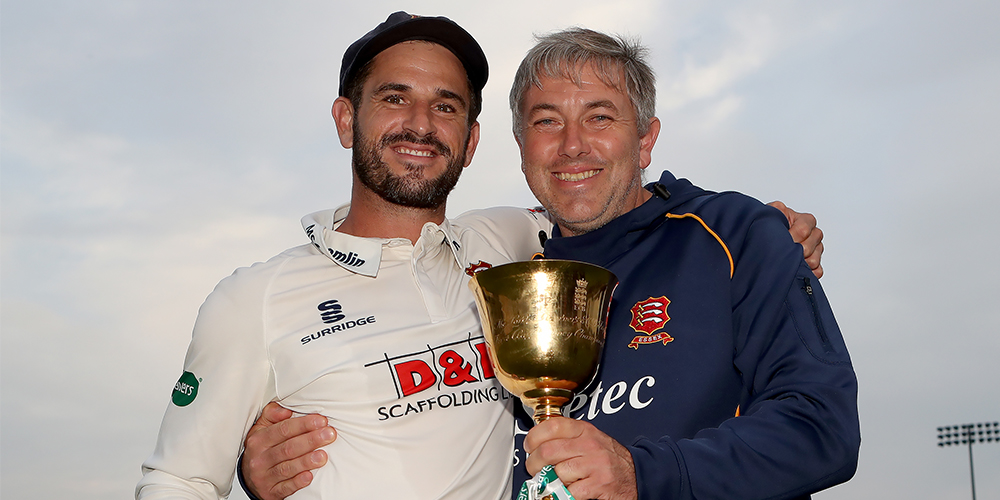 One of the key ticks next to Silverwood’s name is his experience on the county circuit which is (yet in recent times has failed to be) the breeding ground of English talent. Although relatively unexperienced in the capacity of head coach, the 44-year-old transformed Essex, who were previously languishing in mediocrity and a shadow of the title-winning sides of the eighties, into back-to-back County Championship title winners, first in Division 2 and then in Division 1. In his first senior coaching position Silverwood delivered the county’s first Division 1 title in 25 years.

He is well-liked not just within the England changing room but also by his former Essex colleagues. One of those, Ravi Bopara, told the Guardian: “He (Silverwood) does not leave a stone unturned. He’s very disciplined in how he wants his cricket to be played. One thing we always said at Essex under him was that if we could control the run rate, that will bring rewards. It’s simple but effective. He’s a coach who gets the best out of players.”

Endorsements like this help to squash questions over whether he is the right man for the job. It could be argued that selecting an existing member of a coaching team that had struggled in Test cricket is cutting your nose off to spite your face and it was time for a new voice and lease of life in the dressing room.

Kirsten would’ve been the ‘sexier’ appointment with his global experience. With England desperately struggling with the bat in the longer format of the game, Kirsten, who scored over 7,000 runs at an average of 45.27 opening the batting in Test cricket, would’ve been the straight forward choice in trying to turn around their fortunes. The South African also had far more experience in international Test cricket, playing 101 times for his country compared to Silverwood’s six appearances.

But the ECB liked what they saw. Silverwood reportedly interviewed very well, giving a clear indication as to the direction he wanted to take the side and most importantly delivering a clear message on how England would attempt to win the Ashes in Australia in 2021-22 whilst challenging for the inaugural World Test Championship.

The ECB panel comprising of Tom Harrison, the ECB chief executive, John Neal, the head of coach development, and Giles described Silverwood as the “standout candidate” and said: “It is his intimate understanding of our structures and systems and his close relationships with Test captain Joe Root and white-ball captain Eoin Morgan that will help us develop our plans for the next few years.”

Kirsten, on the other hand, reportedly failed to impress the panel with his interview. You’d hate to think that a head coach of an international cricket team was given the job just because of his Powerpoint presentation skills and this is undoubtedly a brave appointment by Giles.

But it is one he is clearly confident in making. Senior players in the England dressing room would undoubtedly have been consulted for their thoughts and the fact that Silverwood was eventually awarded the role speaks volumes for the esteem and respect they hold him in. Coming into the inner sanctum of a new dressing room can be a daunting prospect and one less thing for the familiar face of Silverwood to contend with.

Touring New Zealand and South Africa (who, admittedly, are not currently at their best) this winter gives Silverwood an unforgiving start to life in the hot-seat. But if there’s anything we’ve learned about England’s new strapping head coach, it’s that you write him off at your peril. This wasn’t a token appointment to give a young English coach a chance.

Silverwood has done his time in the background and now it’s time for him to step into the spotlight.

About the Author: Henry Clark - @HenryWAClark

My love of cricket stems from playing in the back garden as a child and although I managed to play county age group cricket with my beloved Kent, I knew from those days with my blue plastic Gray-Nicolls bat that I’d probably struggle to make the cut after being bamboozled by my dad’s under-arm leg-spin. Now, with more realistic expectations, I am pursuing my dream of becoming a sports journalist and currently study journalism at the University of Sheffield. With experience at Sky Sports News, Wisden and Daily Mail sport I’m aiming to give a fresh perspective on the world’s greatest game and hopefully spark some debate.